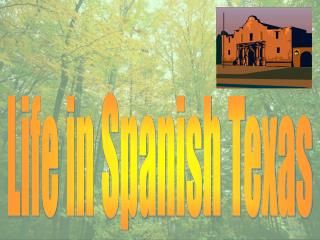 Life in Spanish Texas. Why come to Texas?. to escape the cruel conditions on the haciendas (large estate or ranch in Spanish territory) in New Spain. driven to the area by droughts or other natural disasters Adjective Agreement in Spanish - . start. in spanish the adjective must match the noun in both gender and number. choose

Spanish Misrule Cartoon from Puck - . this is a political cartoon from the mid-1890s depicting how spanish misrule in

Chapter 14 Flashcards - . fur trappers who lived dangerous lives and lived off the land. . mexicans who lived in texas at