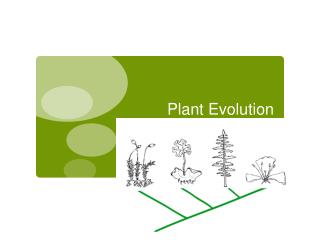 Plant Evolution. Introduction to the Green Plants. Land plants first appeared in the Ordovician (~460 million years ago) Today, with more than 250,000 species, they are second in size only to the insects. We now know that plants, like all living organisms, had aquatic ancestors. Plant and Fungi Evolution - . figure 26.1 some major episodes in the history of life. figure 29.1. chara species, a pond

Plant Evolution and Classification - . adapting to land. life flourished in oceans for more than 3 billion years. no

An overview of Plant Evolution - . key moments in the life of kingdom plantae. how did we get from here to there?. key

21.1 Plant Evolution and Adaptations - Introduction to plants. chapter 21. 21.1 plant evolution and adaptations. when