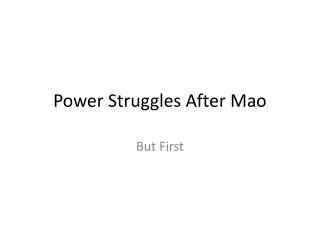 CHINA AFTER MAO - . essential question : how did china evolve in the years after mao zedong’s death?. mao zedong was

China After Mao - . mr. ornstein willow canyon high school ib history. answer???. “it does not matter if the cat is

Sectional Struggles - . ap us history. the union in peril. the north had been industrializing rapidly, and large cities