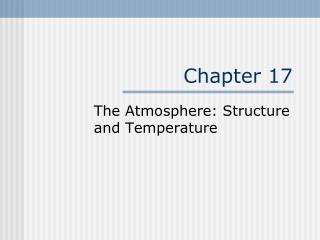 Chapter 17. The Atmosphere: Structure and Temperature. Intro. to unequal heating…. Why is it colder toward the poles than it is near the equator? Does this relate to climate? First off, let’s describe…. Weather Defined. Weather is …… The state of the atmosphere at any time and place is.