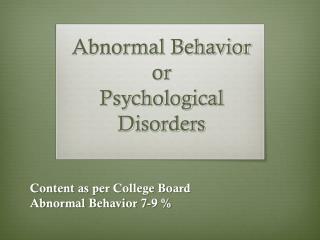 Abnormal Behavior or Psychological Disorders. Content as per College Board Abnormal Behavior 7-9 %. What is Normal?. In a small group of 3-5 students, determine what you would call “ normal ” Not who, what is normal?. What is well-being?. Psychological Disorders - . psychology 12. what is normal?. what are examples of “normal” adolescent behaviour?

Chapter 16 Specific Disorders and Treatments - . progress in abnormal psychology. the growth of understanding of mental

PERSONALITY DISORDERS: - . an enduring (long-standing) pattern in two or more of the following areas: 1) cognition