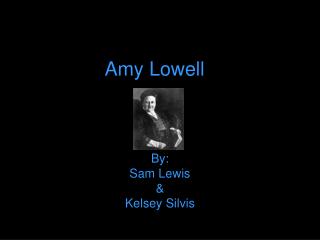 Shooting the Sun, Amy Lowell - . read the poem twice to yourself. work with a partner, using a dictionary and thesaurus,

Lowell Girls Presentation - . labor conditions by jonathon krautsack and joe eato. pay. the lowell girls were paid once a

The Lowell Experiment - . diana wu and kelly xu. the beginnings of the factory system in america. samuel slater-