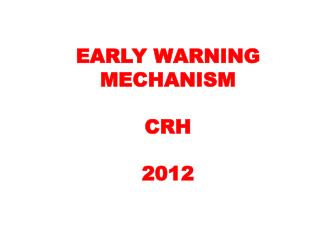 EARLY WARNING MECHANISM CRH 2012. The Early Warning can be defined as a warning, a warning signal to inform officials and the public. Mechanism of addition of HBr to an Alkene - . step 1: formation of a carbocation step 2: nucleophillic addition of

- WARNING - - . the following presentation contains explicit adult photos and language and is not suitable for minors. if

PR Warning: - . never pick a fight with someone who buys ink by the barrel…. what it is…. public relations is a

PEWS - Pediatric early warning score. pews. what is it?. tool assigns designated scores for the following areas of the