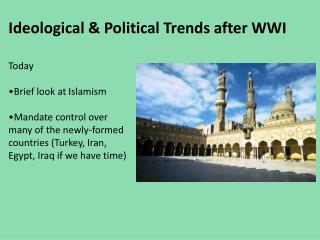 Ideological & Political Trends after WWI. Today Brief look at Islamism Mandate control over many of the newly-formed countries (Turkey, Iran, Egypt, Iraq if we have time). Last time: Watershed @ Turn of 20 th Cent. WHY? Conflicting promises and messy diplomacy Career Trends and Opportunities - . chapter 5 . employment trends of the future. keep up with what is happening in the