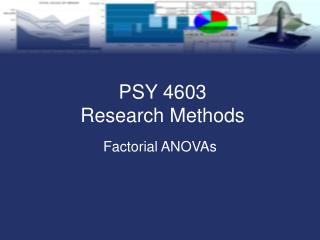 ANOVAs - . with richie . questions we’ll answer today. what is an anova and what does it do? why do we use an anova?

MORE ANOVAs - . anova can be done with any number of factors, between and within dividing the variance changes the

Two Way ANOVAs - . factorial designs. factors. same thing as independent variables. referred to as factors when there are

FACTORIAL EXPERIMENTS - . this approach has significant advantages and disadvantages. basic approach. access to the

Factorial Designs - . background. factorial designs are when different treatments are evaluated within the same

Factorial ANOVA - . 2 or more ivs. questions (1). what are main effects in anova? what are interactions in anova? how do

Factorial Designs - . more than one independent variable: each iv is referred to as a factor all levels of each iv

Factorial Experiments - . factorial design = experiment in which more than one iv (factor) at a time is manipulated uses