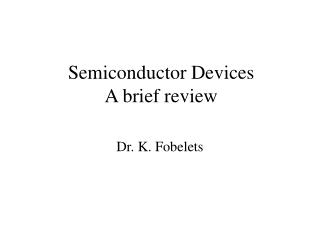 Semiconductor Devices A brief review. Dr. K. Fobelets. Purpose of the course. Study bipolar devices in more detail Diodes and BJTs Closer to reality: recombination What causes the delays in these devices when switching?. The most frequently used sentence in this course will be:. Physics of semiconductor devices - . nihar r. mahapatra. bonding in solids. the interaction of electrons in neighboring

Introduction to Semiconductor Devices - . subimtted by :- dinesh ghalot. prerequisites. to understand this