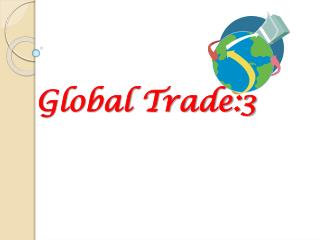 Pre-Class –Read Page 79-80 - . what good was the backbone of the trans-saharan trade? what were the effects of this

Chapter 10 International Trade - . these slides supplement the textbook, but should not replace reading the textbook. why

Chapter 5 International Trade Theory - . trade theory. free trade refers to a situation where the government does not