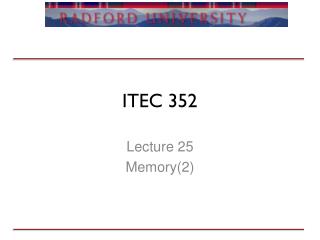 ITEC 352. Lecture 25 Memory(2). Review. RAM Why it isn’t on the CPU What it is made of Building blocks to black boxes How it is accessed Problems with decoders Row / Column solution. Objectives. ROM Cache memory. Other elements.