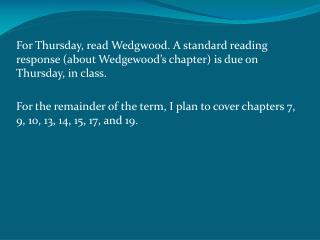 For Thursday, read Wedgwood. A standard reading response (about Wedgewood’s chapter) is due on Thursday, in class. For the remainder of the term, I plan to cover chapters 7, 9, 10, 13, 14, 15, 17, and 19. Widespread Irrationality?. Kahneman and Tversky and the conjunction fallacy: Modernism &amp; “The Metamorphosis” - . reactions to a changing world. not a synonym for “contemporary” early

Chapter Fourteen - . introduction. disruptions to the financial system are surprisingly frequent and widespread.

Rheumatologic Assessments - . what is needed to establish a differential diagnosis consider the most common conditions

A History of Drug Abuse and Addiction in the U.S. Sue Rusche, Co-director Addiction Studies Program - . history of

LEGIONELLA - . management &amp; control. is it worth worrying about?. legionellosis. legionella = water-borne

The Pace of Life - . brainstorming. discussion: what did we use to expect from technology? has technology made our lives

I Samuel 3 Samuel Is Called to Duty - . 1 sam 3:1 (nkjv). then the boy samuel ministered to the lord before eli. and the

The Battle of Mogadishu - By: sean godfrey. the battle of mogadishu. background. at the time somalia was crumbling due to

Round Table and Panel Discussion The psychology of Mistakes American Academy of Appellate Lawyers - . massimo