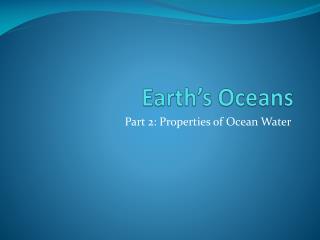 Earth’s Oceans. Part 2: Properties of Ocean Water. Composition. Ocean water is a mixture of gases and solids dissolved in pure water. 96.5% H 2 O 3.5% or 35 0/00 (parts per thousand) dissolved salts Most of the 90 naturally occurring elements have been found in seawater. Oceans - . water, water everywhere… but only on the earth!. oceans. over 70% of the earth’s surface is covered by

EARTH`S LAYERS - . inner core the inner core is solid because of all the heat and pressure. mantle the mantle is molten

Oceans - Where are the oceans?. identify the oceans. oceans. tides. waves. currents. the ocean floor. ocean storms. where

OCEANS - . facts about the great blue waters of our earth by vicky sivillo. the earth has 5 oceans……. the atlantic,

 Oceans  - . by coltin. . oceans are cool because there have lot of things like sharks , sting rays , eels ,

Oceans - . why is the ocean salty?. 1. the ocean is salty because of dissolved chemicals eroded from the earth's crust

Oceans - . water everywhere. 71% of the total surface of the earth is covered by ocean, rivers, lakes, under table and

Oceans - . by scott lovely and cody nelson. temperature. it is 60 degrees by day. winter is around 36 degrees. it is 30