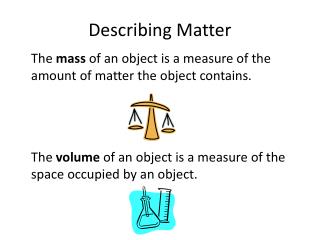 Describing Motion - . part 1 – position, distance and displacement. kinematics. the study of motion. what types of

Describing people - . what do they look like?. find out the words for each question. untidy, shabby, dirty. scruffy.

Describing Matter - . what is chemistry?. the study of the properties of matter and how matter changes. what is matter?.

Describing Data - . charts and graphs. lecture objectives. you should be able to: define basic terms recognize types of

Describing Motion - . http://www.youtube.com/watch?v=drb5psxjerm. speed. the distance an object travels in a certain

Describing Matter - . chapter 7 lesson 1 page 258. matter. why does matter, matter? everything in the universe is:

Book K – Chapt.1, section 1 Describing matter - . essential question: what are the two kinds of properties that all

Describing Matter - 2.1. describing matter. matter- anything that has mass and volume and takes up space different forms

Classifying and Describing Matter - . classifying matter. substances. the units that make up all matter are called atoms.

Describing Matter - . pages 11-19. how do you identify an object?. descriptions: color smell touch taste hear others?.

DESCRIBING PLACES - . use the words in the box to say where things are. describe and compare the pictures. now read and

DESCRIBING PEOPLE - . today we shall learn to speak what different people are like by giving details about them, which

Describing Matter - . properties of matter. matter: anything that has mass and volume. substance : is a single kind of