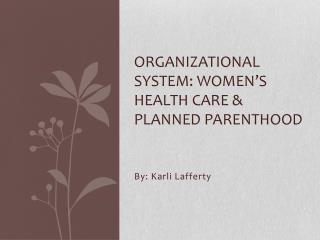 Organizational System: Women’s health care & Planned parenthood. By: Karli Lafferty. US Health . Currently, the US is the only industrialized democracy that doesn’t provide universal healthcare for all citizens (Hartman, 2012). Israeli and Palestinian Women in Dialogue - . interview questions. *1. what is your organizational structure? * 2. what

A Need to Transform the U.S. Health Care System: Improving Access, Quality, and Efficiency - . a chartbook compiled by