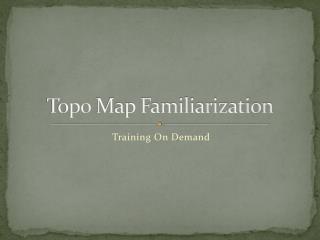 Topo Map Familiarization. Training On Demand. What is a Topographic Map. A topographical map is a representation of the Earth, or part of it. The distinctive characteristic of a topographic map is that the shape of the Earth's surface is shown by contour lines. “ Topo Joe” - . since the creation of distinctive unit insignia (dui ), soldiers and designers have placed

Topo Profiles - . how to make a profile from a topo map. from topo to profile. find the mountain you want to view in

Aircraft Familiarization - . lesson objectives. at the conclusion of this lesson you will… understand the basic

FAMILIARIZATION WORKSHOP - Government of the district of columbia anthony a. williams, mayor. james a. buford, interim

Apparatus Familiarization - . apparatus familiarization. during this presentation we are going define and become more

Aircraft Familiarization - Objectives. to familiarize personnel with identification characteristics of the canadair

APPARATUS FAMILIARIZATION - Objective. to identify and describe the characteristics of each apparatus in the departmentto