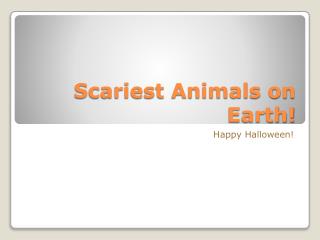 Scariest Animals on Earth!. Happy Halloween!. Aye-Aye. Primate found in Madagascar Bony witch-like fingers that they use to pry out insects from tree trunks They are killed based on local superstition that they are the harbinger of death! Don’t worry though, they are completely harmless! Chordates - . chapter 23. phylum chordata. by the end of the cambrian period, 540 million years ago, an astonishing

What is the Earth System? - . the atmosphere (air) extends up from the earth surface for several hundred kilometers. the

Introduction to Zoology - . unit 1- mrs. stahl. zoology- what is it? . the study of animals of course!  extremely

Chapter One - . earth spheres. chapter one. do now : why is planet earth suitable for life? observe a visual model of

Creation in Genesis 2: Streams and ribs - Read genesis 2. write out the correct order of creation in gen 2 god tells man

O ceans - . by:dewayne. f acts. the ocean is blue. the earth has five oceans. the water is saltwater. they are the

Sorting Animals Lesson 55 - . the world is full of animals. to keep track of animals scientist sort animals into groups.

Why Earth Science? - . nearly everything we do is connected to the earth: its land, soil, rocks, minerals, atmosphere,