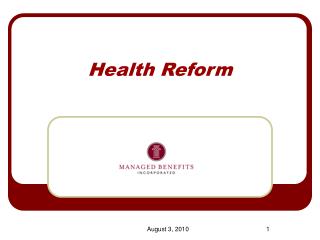 Health Reform. Summary. This presentation will introduce you to the pressing issues you need to be concerned with regarding the Patient Protection and Affordable Care Act signed into law March 2010 Health Reform - . healthpass and health reform individual mandate is good for all strict penalties needed for opting out

Health Reform - . summary. this presentation will introduce you to the pressing issues concerning the patient protection

Health Care Reform - . sherry glied sag1@columbia.edu. health reform was not inevitable. some people have said that it