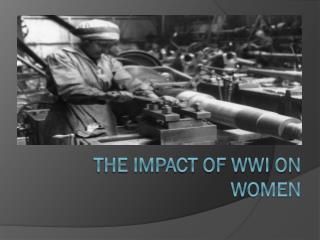 The Impact of WWI on Women. This Lesson. Describe some of the different types of work done by women during the war Explain why some women went that bit further to help the war State some of the reasons why men were uneasy with the new female workforce. Women’s Contribution. The impact of WWI on Scottish women - . military, medical and workforce. before the war. various things restricted women

The Impact of WWI on Canada - . security of canada. even though the war was fought in europe, canadians were afraid that

The impact on women - . women suffer disproportionately more 70% of world’s poor are women women account for the

WWI &amp; Impact on the Homefront - . encouraged to enter industry and agriculture to replace laborers fighting in

The impact of the war on women - . downloaded from www.schoolhistory.co.uk. key points before the war, the most common

The impact of volunteering and conscription: The role of women in WWI - . all will be able to describe the social

Women in WWI - . roles. women provided crucial support as wives, mothers, and sweethearts of the men who fought they

Women During WWI - . before the war. seen for “traditional” roles and duties. recognized as objects of beauty, not

Women During WWI - . women and the war effort. look at the following primary sources and infer – what do they tell us

Women During WWI - . before the war. seen for “traditional” roles and duties. recognized as objects of beauty, not

WOMEN DURING WWI - . as the war went on, acute labour shortages developed. women filled this need. many women became

Women in WWI - . new roles and rights. women’s work. before the war, women were expected to stay at home women who did

Role of women in WWI - . women officially served in the armed forces for the first time during wwi, mostly as nurses.

Chapter 1 - Impact of WWI - . focuses: what caused world war one to happen? what were the effects of world war one?.