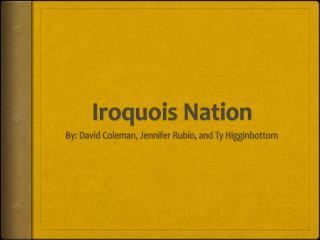 Iroquois Nation. By: David Coleman, Jennifer Rubio, and Ty Higginbottom . Location. The Location of the Iroquois aka the Iroquois Confederacy is located in present day New York. Associates . The Iroquois civilization was made up of the 5 nations. The Iroquois Nation - . by scott, chris, and tiffany. where were they?. the iroquois lived in and near what is modern day

Iroquois - . “rattlesnakes”. territory. north-eastern region of modern us, between the great lakes and atlantic

Iroquois - . these are some of the foods the iroquois indians ate. the three sisters. corn beans squash corn, beans, and

Iroquois - By: matthew and hayley mr. keethler’s class. iroquois. tools. adz- a tool somewhat like an ax. awl- a small

Iroquois - By: the grumpy grinch’s. iroquois . what their homes look like?. the longhouse looks like a house that is

Iroquois - . by: kayla and andrew. food. ate corn, squash, beans, and what ever fish or animals they caught. clothing.

Iroquois - . people of the eastern woodlands. tools and weapons. the iroquois had many weapons and tools for hunting,

The Iroquois - . by devin woodruff, cole sutton and caleb carroll. the dolls are from the iroquois. this is an example of

The Iroquois - . june 6, 2014. by virginia valdivia. location and name. they were known as the haudenosaunee, the people

IROQUOIS INDIANS - . teaching american history. inez cutler. h0w did native americans come to the forest?. what do you

Iroquois Confederacy - . how first nations helped shape the modern world. background. who are they?. location. the

Landscaping Iroquois - First, why some homeowners are reluctant to beautify in their working environment is due to the