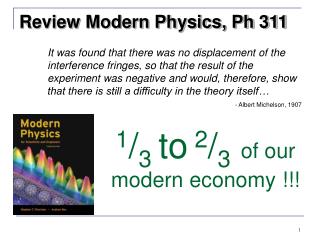 Review Modern Physics, Ph 311. It was found that there was no displacement of the interference fringes, so that the result of the experiment was negative and would, therefore, show that there is still a difficulty in the theory itself… - Albert Michelson, 1907.

Colloquium article in Reviews of Modern Physics 75 , 913 (2003) - Quantum phase transitions: from mott insulators to the

PHYSICS 2010 Final Exam Review Session - . note that this review is not covering everything. rather it is highlighting

General Physics Review - . fall 2006. general physics review. question 1 the displacement of an object for a round trip

6 Unavoidable Etiquette for the Modern Gentleman - Who is a gentleman? he is a person who attracts people by the quality