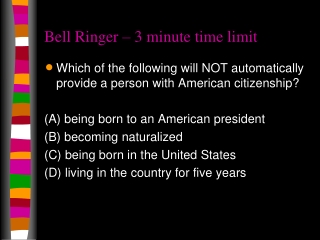 Bell Ringer – 3 minute time limit. Which of the following will NOT automatically provide a person with American citizenship? (A) being born to an American president (B) becoming naturalized (C) being born in the United States (D) living in the country for five years. Bell Ringer - . read page 231 and answer #1 and #2 on your bell ringer sheet. bell ringer answer. a popular athlete will

Bell Ringer Tuesday, February 21 st - . no bell ringer stamp if you don’t have an id on and/or you are talking! takeout

Bell ringer… - . what is the chemical formula for water? is it a compound, element, or a mixture? how do you know?.

Bell Ringer Tuesday, February 21 st - . no bell ringer stamp if you don’t have an id on and/or you are talking! takeout

DBQ 一 Bell Ringer - . any day except the first day: get out your “dbq guide” paper. pick up your dbq packet from

Bell Ringer - . directions. bell ringer. write down, as best as you can remember, ms. barker’s policy on late work.