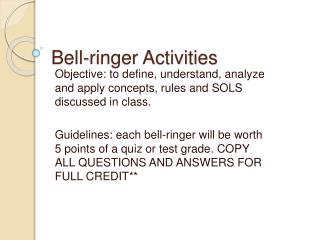 Bell-ringer Activities. Objective: to define, understand, analyze and apply concepts, rules and SOLS discussed in class. Guidelines: each bell-ringer will be worth 5 points of a quiz or test grade. COPY ALL QUESTIONS AND ANSWERS FOR FULL CREDIT**. Bell-ringer: Grammar Review.