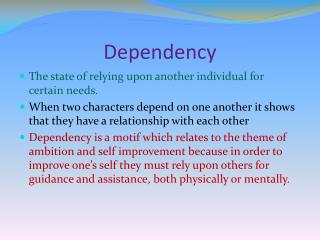 Dependency. The state of relying upon another individual for certain needs. When two characters depend on one another it shows that they have a relationship with each other Dependency - Innovation: new assumptions. safety net. families are needy families viewed as in crisis and in need of

Conceptual Dependency - . cis 479/579 bruce r. maxim um-dearborn. what is it?. theory of how to represent the meaning of

Functional Dependency - . rajhdeep jandir. definition. a functional dependency is defined as a constraint between two

Dependency Preservation - . by jason allen. why do we preserve the dependency?. we would like to check easily that

Dependency Ratio - . the proportion of persons above 65 years and below 15 years of age are considered to be dependent on