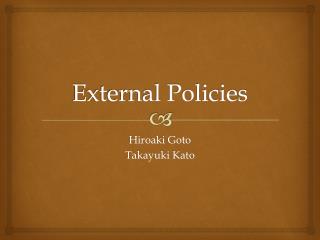 Policies - . policies and decisions. in order to act effectively in the real world, we have to make decisions. knowing

External Openness and Employment: The Need for Coherent International and National Policies - . desa development forum on

External Sector - . econ 102 _2013. external sector. how is a country linked with other countries in the global world?

ASMBS CME Policies, Procedures and Guidelines for Presenters - . a review for all presenters of asmbs-sponsored