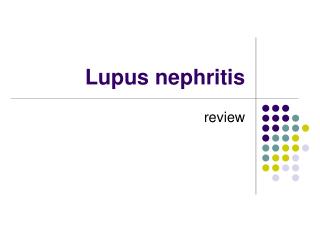 Lupus nephritis. review. Introduction. Tissue injury can affect nearly everyorgan, however, it is the damage to the kidney that is largely responsible for morbidity and mortality Within the kidney the expression of SLE is heterogeneous. Lupus Nephritis - . introduction. 60 – 75% of pts with sle probably the most serious complication differs in clinical

Lupus nephritis - . review. introduction. tissue injury can affect nearly everyorgan, however, it is the damage to the

Lupus Nephritis - . by: christine nguyen. what is

THERAPY IN LUPUS NEPHRITIS - . approximately 25% to 60% of unselected patients with sle have renal involvement as

Cyclophosphamide vs Mycophenylate mofetil for lupus nephritis - . the curse of living in interesting times?. mary anne

Nephritis - . candice w. laney. what is nephritis?. - it is essentially inflammation of the kidneys. types of nephritis.

Tubulointristitial Nephritis - . a disorder of the interstitium and tubules. acute interstitial nephritis. 70% drug

Case: Fever and Back pain in a patient with lupus nephritis - . group: b3b facton , rosabelle to garcia, irka