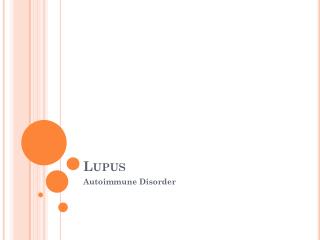 Lupus - . caitlin russell science, period 3 january 1, 2002. what is lupus?. an autoimmune disease when your body

Lupus - . by: josue diaz and corey duval. *what is lupus?!*. lupus- chronic autoimmune disease that attacks the body.

Lupus - . by james and carol jean. the problem. you’ve just come from the beach, and there are rashes or sores all over

Lupus Anticoagulants - . dr.hani. an acquired autoimmune thrombophilia , characterized by: a) vascular thrombosis . b)

Lupus Erythematosus - . by thomas janssen 10 white 2012. this is an autoimmune (caused by body's own immune system)

Lupus nephritis - . review. introduction. tissue injury can affect nearly everyorgan, however, it is the damage to the

Lupus Nephritis - . by: christine nguyen. what is