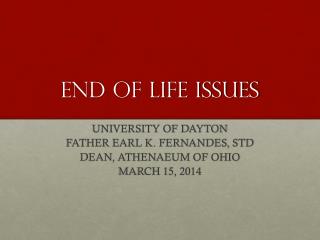 END OF LIFE ISSUES. UNIVERSITY OF DAYTON FATHER EARL K. FERNANDES, STD DEAN, ATHENAEUM OF OHIO MARCH 15, 2014. The Human Person. Made in the image and likeness of God. Inherent Dignity Unity of Body and Soul Intellect: Able to know the good. Free Will: Able to Choose the Good. END OF LIFE ISSUES - . the journey through caregiving. factors that determine how you will handle grief. the way your

End of Life Issues - . illness transition. for most patients with cancer, the initial aim and hope is for cure for those

Aging, Death, &amp; End of Life Issues - . allport’s characteristics of a healthy adult. extension of sense of self

Veteran Issues at the End of Life - . veteran volunteer training. objectives of training. at the end of the training, the

Veteran Issues at the End of Life - . veteran volunteer training. objectives of training. at the end of the

End of Life - . readmission and chronic illness that could benefit from end of life discussions.

End of Life - . at the. what every health professional should know about palliative care. toby campbell, md msci.