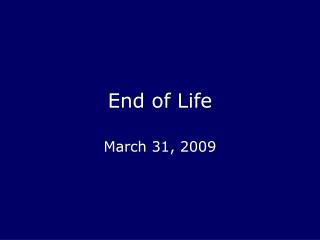 End of Life. March 31, 2009. Persistent Vegetative State. “People diagnosed with PVS have damaged or dysfunctional cerebral hemispheres, and this results in their not being aware of themselves or their surroundings. They are incapable of thinking and of deliberate or intentional movement.” End of Life - . readmission and chronic illness that could benefit from end of life discussions.

End of Life - . at the. what every health professional should know about palliative care. toby campbell, md msci.

End of Life - . divya bappanad may 6, 2010. issues to address. advance directives do not resuscitate/do not attempt

THE END OF LIFE - Chapter 19. the end of life. the quest for “healthy dying”. thanatology: the study of death and

End-of-life decisions - . patient has the right to accept or refuse medical treatment (federal constitutional right, plus

End of Life Care - Mrs. rogers. if mrs. rogers came back into the hospital with worsening chf that was determined to be

The End of Life - . for each topic you will need to know a range of christian views as well as your own viewpoint. this

End of Life Care - Learning objectives. to familiarize housestaff with limitations in care - definitions and policies at