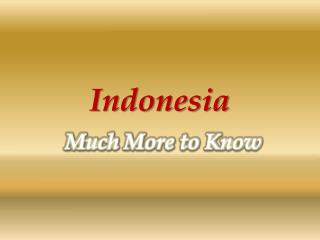 Indonesia. Much More to Know. When you think about Indonesia, what are the first three things that come to mind?. Bali Island. Mount Bromo , East Java province. The largest mosque in Southeast Asia, Istiqlal Mosque, Jakarta. There is a n ew, potential Indonesia!. Indonesia Ku my indonesia - . what is indonesia ku ?. interactive narrative that teaches kids about indonesia’s

INDONESIA - . geography indonesia is an archipelago in southeast asia consisting of 17,000 islands (6,000 inhabited) and

Indonesia - . where in the world is indonesia? southeast asia, that’s where… lonely planet photographs “indonesia

indonesia - You will come to know what toys you can buy online.choose any toy you wish to order and we will get it at

Indonesia - . by: daniela nguyen. important facts about indonesia. the capital of indonesia is jakarta. the official

Indonesia - . you will need to take notes. remember that various information will be repeated along the way. this is to

INDONESIA - Child labour in indonesia, vs. the industrial revolution by: kadie . indonesia . some quick facts about