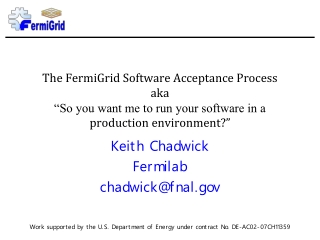 The FermiGrid Software Acceptance Process aka “So you want me to run your software in a production environment?”. Keith Chadwick Fermilab chadwick@fnal.gov. Work supported by the U.S. Department of Energy under contract No. DE-AC02-07CH11359. Background.