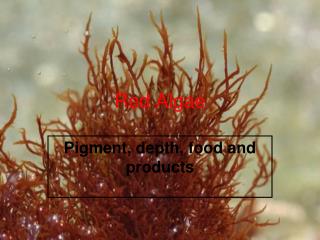 Red Algae. Pigment, depth, food and products. Pigment. The red color of the algae comes from the presence of phycobilin or phycoerythin - a pigment. This pigment absorbs blue light, so red is reflected back. Red Algae - . what is red algae?. it is the largest phyla of algae its scientific name is rhodophyta it is made up of

Algae - . an overview. characteristics. range in size from microscopic to single celled organisms to large seaweed

ALGAE - . hay mrs b and 7j. lets take a journey through algae. so listen up. what is algae?. algae on hand. it’s a

ALGAE - . algae are emerging to be one of the most promising long-term, sustainable sources of biomass and oils for fuel,

Algae - . ben, anna, pranavi. phaeophyceae  or b rown a lgae. it consists of multi cellular marine algae , that is

Algae - . reproduction of ulva. alternation of generations. plants reproduce by switching back and forth between haploid

Algae - . an overview. algae. algae are organisms, or living things. it is very important because they make much of