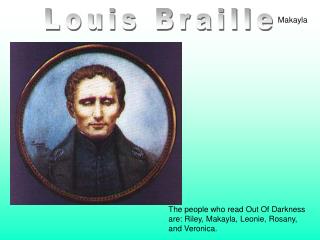 Louis Braille. Makayla. The people who read Out Of Darkness are: Riley, Makayla, Leonie, Rosany, and Veronica. About the Author. Riley. Russell Freedman was born 1929, in San Francisco He has written over 50 books for young people The life of Louis Braille - . what did louis braille do that was so

Louis XIV - . death of the sun king. louis xiv dies in 1715. the government coffers (treasury or money that the

Mayson Cabo Assistive Technology and How it Has A dvanced - . d iagnosis. retinopathy of prematurity, challenges and

SHARING OUR FEELING - . we all want to share our feelings. old and disabled persons need our love and care. disabilities

St.Louis - . by: niara hudson and valencia parr. events of st.louis. six flags the gateway arch the muny at forest park