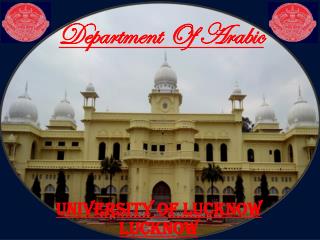 Department Of Arabic. University of lucknow lucknow. DEPARTMENT PROFILE. The following details show the history of the department at a glance SOCIOLINGUISTICS OF ARABIC - . sinfree makoni february, 2012. rationale. question: is it possible that the us-led war on

Arabic - . language of the half term. places where arabic is spoken around the world. map of the country arabic

Arabic - . by: amnah said . introduction :. arabic ranks sixth in the world legal table of languages. with estimation of

Role of Arabic Translation Services in Translating Arabic - In this era of globalization, startups, small businesses, and

Arabic Calligraphy - . introduction. the arabic language is written from right to left. there are 18 separate letter

Arabic Retreat - With us as your guides, you will be sure of getting the best plan for sightseeing. you will not miss

Arabic Scientists - . sciences:the driving forces??. the prophet muhammad said &quot; it is the duty of every muslim