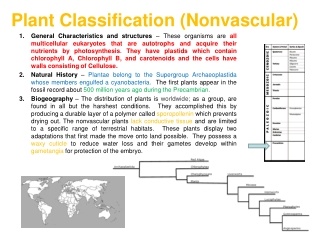 Plant Groups - . chapter 3 lesson 2. what are the characteristics of seedless, nonvascular plants?. 1. mosses,

INTRODUCTION TO PLANT DIVERSITY - . the major groups of living things. a classification that depicts genetic

Plant Classification - . what is a plant?. plants are defined as eukaryotes that have cell walls containing cellulose

Chapter 28: Plant Evolution and Classification - . section one: overview of plants. adapting to land. nothing could live

Vegetables - . webster’s dictionary refers to vegetables as “any plant,” but more specifically as those that are

Chapter 16 Plant Classification (Systematics) I. Introduction: - Plant classification or taxonomy is the science of