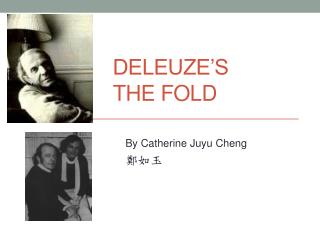 DELEUZE’S THE FOLD. By Catherine Juyu Cheng 鄭如玉. Two Floors. “the Baroque trait twists and turns its folds, pushing them to infinity, fold over fold, one upon the other. The Baroque fold unfurls all the way to infinity. First, the Origami &amp; Mathematics: Fold tab A to flap B? - . by joseph m. kudrle department of mathematics/statistics

“Convicting Those Who Contradict” - . helping saints prepare to answer and persuade those in error. introduction.

ASSESSMENT AND EVALUATION TOOLS AND TECHNIQUES FOR CCE - Continuous comprehensive evaluation ?. continuous and