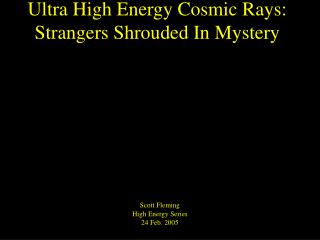 Cosmic Rays - . not part of the em spectrum like uv and ir. gamma-rays have the smallest wavelengths and the most energy

On Cosmic Rays, Bat Droppings and what to do about them - . david walker princeton university with jay ligatti, lester

SPACE DETECTORS TUS and KLYPVE for STUDY of ULTRA HIGH ENERGY COSMIC RAYS - . talk at the international seminar on ultra