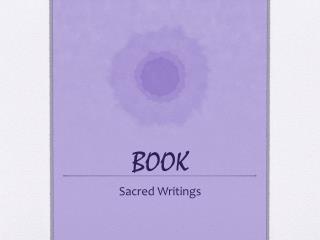 BOOK. Sacred Writings. Introduction . Images may not always be welcomed or condemned in the 5 major religious traditions, but they all have writings that they consider authoritative. Human language can capture the divine voice. Questions to consider. Form and Contents: Basis of Authority Book - The. land. of the. book. a 9 day your of israel and palestine based in galilee, bethlehem and jerusalem led by

book - . a mother and her young boy are gathering mushrooms in the german forest. the boy finds some poisonous ones. the

Book - During february half-term!. land. the. book. of the. a 9 day tour of israel and palestine based in galilee,

BOOK - . if it actually happened in the story!. brain. if it came from the mind of the writer! (drawing a conclusion,

Book - Land. the. book. of the. an 11 day tour of israel and palestine based in galilee, bethlehem and jerusalem led by