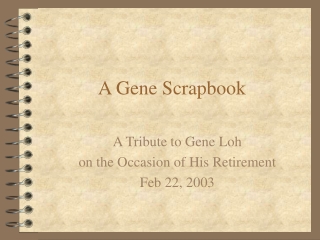 A Gene Scrapbook. A Tribute to Gene Loh on the Occasion of His Retirement Feb 22, 2003. The Early Days. B.Sc. Physics, Virginia Polytechnic Institute, 1955 Ph.D. Physics, Massachusetts Institute of Technology, 1961. The Missing Years. A Family Scrapbook - . replace “a family” with either “the beale family” or “the mcnab family” on each slide

Make a pwetty Scrapbook ! - . by jordan morris. clear purpose with a beneficial learning outcome for yourself. my

Whitsy’s Scrapbook - Resistance. whitsy’s scrapbook. whit. f riends. whit is whitsy's brother and he is a wizard. he

Holes Scrapbook - . genre. by louis sachar. created by sarah hickerson. characters . stanley-caveman his is an only

Franny’s Scrapbook - . b y jennifer jones. p.5: “she had been a mad scientist since she was just a baby”. i have

Cultural Scrapbook - . eduardo tecla pd 3 geography h. there are about 10.7 million people living in greece the growth of

Cultural Scrapbook - . turkey. population facts. the population of turkey is estimated at 77,800,500 since it is the 17

Chenghao’s Scrapbook - . by:cate,brooke, and elyse. this is you with mrs. stone she is your 4 th grade nuen-aid. this