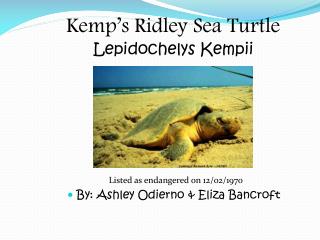 SEA TURTLE REPRODUCTION - . often, a female is pursued by more than one male fertilization is internal. females dig a

Sea Turtle Adaptations - . by: zadie mccraw. the shell. all sea turtles have streamed-lined shells. . where they live. i

Leatherback Sea Turtle Dermochelys coriacea - . “a hypocrite is the kind of politician who would cut down a redwood

Leatherback Sea Turtle - . by: sam lee. body description. largest of all living sea turtles. can reach up to 6 feet. can