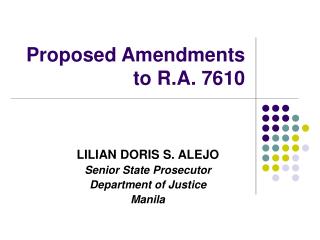 Proposed WAC 296-305 Changes and the Impacts to our Organizations - . committee’s charge:. review the revised standard

ARTICLE I - (original and proposed amendments) by-laws of the philippine navy savings and loan association, inc.

Amendments to the Municipalities Act, 1999 - . background…. municipalities in this province are governed mainly by the

Notice of Proposed Rule Making - . changes to practice for the examination of claims in patent applications 71 fed. reg.