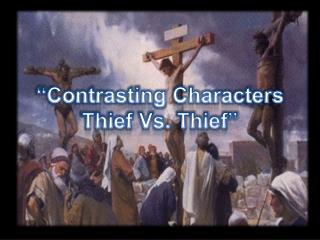 “Contrasting Characters Thief Vs. Thief”. When looking at the hill of Calvary, we tend to focus a great deal on the middle cross, the one on which the Christ was nailed. And rightly so, for that is the cross by which we might be saved. That was the cross to which our sins were nailed. Look at this grapheme. How do we usually say it? - . ie. soundtalk these words. pie. thief. . what is the problem?. if

Why we are here - . and i care because. identity theift cyberstalking these dangers are real!. identity thief. what is

The Book thief - . part 6 . what do you notice about the front covers of the book?. how do the text features help me

THE THIEF ON THE CROSS - . the old testament law of moses still in effect thief under law law nailed to cross testator

Lightening Thief - . rick riordan is the #1 new york times bestselling author of the percy jackson and the olympians

THE BOOK THIEF - . by markus zusak. how are we shown through the beginning of this novel what liesel is like:. deaths

Nobody Loves Me, but You I can always tell a liar And I always know a thief - I know i’m like my family because

The Sword Thief By: Peter Lerangis - . faith fogle. setting. the book that i read for my report was the sword thief. the

Exploring Allusions to Myths in The Lightning Thief - . close reading of prometheus part 1. by presentermedia.com.

The Book Thief - . markus zusak. book review. the following is a review on the book thief below each heading there is

Percy Jackson The Lighting Thief - . rick riordan. setting . they were all over the united states the main spot was at

The Lightning Thief - . by: rick riordan. so…what’s i t a

“Jeopardy” - “a nation’s culture resides in the heart and in the soul of its people.” -mahatma gandhi.

Percy Jackson and the Olympians: The Lightning Thief - . the main