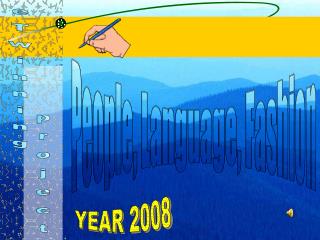 FASHION FOR YOUNG PEOPLE - . greece. girls. every girl has her own personality and uses to wear her own style of clothing

People First Language - . “people first language puts the person before the disability and describes what a person has

Facebook Project – Influential People in Fashion History - . you must complete all of the following pages on an

Reasons People Hate the English Language - . how on earth do you say that word?. at the army base, a bass was painted on

Amaze people with 3D Printing in Fashion Industry - If you want to look classy and fabulous at the same time, you should