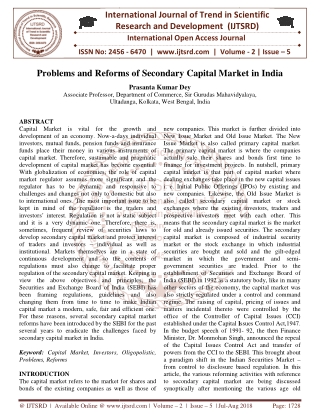 Capital Market is vital for the growth and development of an economy. Now a days individual investors, mutual funds, pension funds and insurance funds place their money in various instruments of capital market. Therefore, sustainable and pragmatic development of capital market has become essential. With globalization of economies, the role of capital market regulator assumes more significant and the regulator has to be dynamic and responsive to challenges and changes not only to domestic but also to international ones. The most important issue to be kept in mind of the regulator is the traders and investors' interest. Regulation is not a static subject and it is a very dynamic one. Therefore, there is, sometimes, frequent review of securities laws to develop secondary capital market and protect interest of traders and investors individual as well as institutional. Markets themselves are in a state of continuous development and so the contents of regulations must also change to facilitate proper regulation of the secondary capital market. Keeping in view the above objectives and principles, the Securities and Exchange Board of India SEBI has been framing regulations, guidelines and also changing them from time to time to make Indian capital market a modern, safe, fair and efficient one. For these reasons, several secondary capital market reforms have been introduced by the SEBI for the past several years to eradicate the challenges faced by secondary capital market in India. Prasanta Kumar Dey "Problems and Reforms of Secondary Capital Market in India" Published in International Journal of Trend in Scientific Research and Development (ijtsrd), ISSN: 2456-6470, Volume-2 | Issue-5 , August 2018, URL: https://www.ijtsrd.com/papers/ijtsrd17124.pdf Paper URL: http://www.ijtsrd.com/management/accounting-and-finance/17124/problems-and-reforms-of-secondary-capital-market-in-india/prasanta-kumar-dey Investment, the Capital Market, and the Wealth of Nations - . capital and investment. types of capital : physical capital

Equity Market in India - . equity market is the market in which shares are issued and traded, either through exchanges or

Progressive Era reforms - . december 8, 2011. call to order. complete the pre-assessment. when you are finished, come up

Chapter 19 - . the capital market. after studying chapter 19, you should be able to:. understand the characteristics of