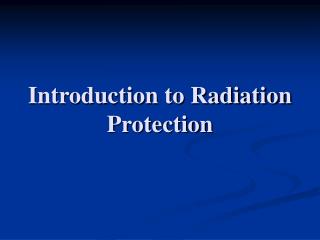 INTRODUCTION TO RADIATION PROTECTION IN PET/CT - . l 1. answer true or false. the most common use of pet/ct scans

Introduction to Radiation: Radiation Types - . types of ionizing radiation. alpha particles stopped by a sheet of

Introduction to Radiation - . the classical atom. all radiation is a byproduct of the decay of the atom … specifically