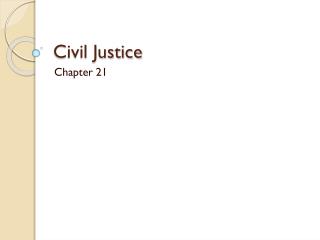 Civil Justice. Chapter 21. Essential Questions. What are they key aspects of civil litigation ? How does the law decide what kinds and amounts of damages to pay the victim ? How does civil law differ from criminal law? What is needed to prove liability in civil court? Civil and Penal Justice - . definitions. in modern societies, the totalities of laws constitute the legal system this

Criminal Cases, Civil Cases, and Juvenile Justice - . what are the steps of a trial, and how are the rights of citizens

European Day of Civil Justice Seminar on European Cooperation in civil matters - . implementation of the stockholm

Chapter 21: Civil Rights: Equal Justice Under Law - . a heterogeneous society. the population of the united states is