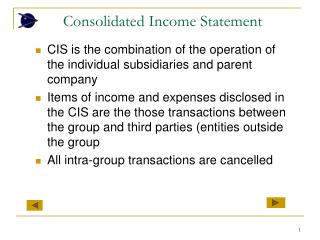 Consolidated Income Statement. CIS is the combination of the operation of the individual subsidiaries and parent company Items of income and expenses disclosed in the CIS are the those transactions between the group and third parties (entities outside the group

Consolidated Financial Statements - . many corporations are composed of numerous separate companies and, in turn, prepare