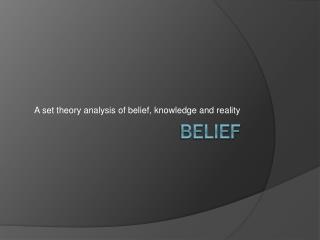 A set theory analysis of belief, knowledge and reality. BELIEF. Belief. Acceptance of a proposition as true Not subject to will Justification may be flawed Degrees of certainty “Believe in” vs. “Believe that” BEYOND BELIEF - . god’s nature revealed through practices of care. the genius of practical theology lies in its

Belief Systems - . animism an ancient religion that centralizes it’s beliefs around the belief that human-like spirits

Belief Systems - . what you will learn today. what are the characteristics of major religions? how are they similar and

Belief Propagation - . what is belief propagation (bp)?. bp is a specific instance of a general class of methods that

Belief Systems - . what you will learn today. what are the characteristics of major religions? how are they similar

beyond belief - . a study of salvation. john 3:5 5 jesus answered, verily, verily, i say unto thee, except a man be born

Belief Systems - . world religions. essential question : how have belief systems impacted the development of cultures and

BELIEF in ALLAH - . outline. the word ‘allah’ who is allah? his names and attributes how do we know him? questions

BELIEF in the HOLY BOOKS - . outline. what does ‘holy book’ mean? how many holy books are there? books that we know