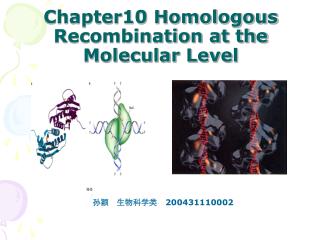 The analysis of homologous recombination frequency

Mutations at the level of the homologous pair - . euploidy : &quot;true&quot; ploidy , meaning two members of

Evolution at the Molecular Level - . outline. evolution of genomes review of various types and effects of mutations how

Why do we care about homologous recombination? - . universal biological mechanism bacteria can pick up new genes

Molecular biology is the study of biology at a molecular level. - Theme: molecular basis of heredity. realization of

Environment from the molecular level: - An e -science project for modelling the atomistic processes involved in

How to measure genetic diversity at the molecular level? - . thomas geburek department of genetics federal research